How to Grow Black Russian Tomatoes Black Russian tomatoes originate from Russia, but little more is known about their parentage. Black Russian is an heirloom tomato that grows in colours ranging from purple to black-skinned. It is medium sized and has a rich tomato taste. Good fruiting and compact vines. It grows better in colder climates taking about 3- 4 months before harvesting. This variety is commonly grown in greenhouses but is also marketed by seed traders as an outdoor variety.

In parts of the United Kingdom that are not prone to very cold weather, they can grow a fair crop outdoors, although the more covered and colder the better.

Black Russian grows as a cordon style of tomato and yields the best tomatoes when cultivated that way. However, if left to its own devices without any pruning, it will still yield fruit but significantly smaller and later in the season.

Black Russian, though, still needs to be pruned appropriately to get a good harvest. Sometimes you can see larger than average and slightly misshapen flowers on this variety. Our practice has taught us to exclude them, for the fruits they produce are often misshapen.

Appearance and Taste of Black Russian

The fruits are much darker than the typical tomato, and the colour of the skin is better defined as mahogany. Fruit size is unpredictable, but individual tomatoes may be estimated to be as big as 300 g, among other smaller tomatoes. Every plant can produce around 3 kg to 4 kg of tomatoes.

The shape is not normal (overall it can be defined as slightly flattened) and you can anticipate the occasional bulge here and there, but it just gives the character of the tomatoes and does not change their flavour. Plants are vigorous growers and need to be periodically pruned to keep them within limits. 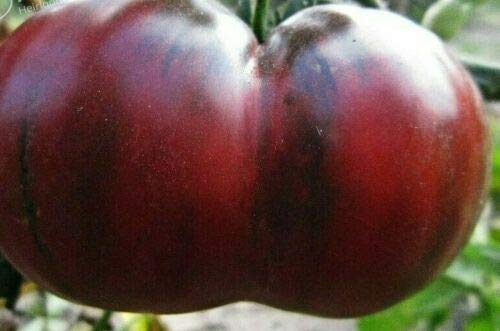 The flavour and appearance are characteristic of black-skinned tomatoes. The orange flesh is very meaty with less juice than certain red forms, ideal for slicing. Flavour is difficult to explain, but most people find it very good. Sweetness with a history of acidity combined with a strong smoky flavour. We love it, personally. Black Russian tends to have a variable taste, taking into consideration some of the characteristics of the soil in which it is grown.

Certainly, friends and neighbours will all want to try at least one thing, I can guarantee that!

Black Russian tomatoes have to be planted in areas with full exposure to sunlight for rapid ripening and optimal fruit production. However, gardeners in warmer regions grow them in locations with partial exposure to sunlight to reduce plant’s heat stress. Tomatoes need well drained soil that is rich in organic matter to grow. If your soil does not meet this requirement, add a layer of well-milled manure or compost before planting.

When you sow seedlings out, you can plant them thoroughly. Tomatoes have the so-called adventitious roots, which means that all the hairs along the tomato stem can form new roots. Planting them deeply secures them by anchoring them firmly to the ground to withstand strong winds.

Black Russian is an undetermined tomato variety, it needs a robust trellis that can withstand its weight as it grows. Excessive watering leaves it unprotected to diseases as spores of fungal diseases may appear. When this happens, the only remedy is to cut off any affected leaves to prevent spreading.

When to Sow:
In Australia, the seeds are usually sown in temperate regions during spring while in subtropical regions they are sown in early Autumn. However, in Australia’s tropical areas, they are sown during the dry season.

How to Sow:
To grow the seedlings, few seeds should be planted in each hole to increase their chances of survival a few weeks after germination. They are usually planted a couple spaces apart, about 60 cm due to their extensive root system. Thus giving them enough space to disperse and collect nutrients.

Time to Harvest:
Although they germinate quickly, it takes 2-3 months before they fully mature. How do you Grow Carrots Successfully?

How to Grow Ailsa Craig Tomatoes Cabbage worms are garden pests infamous for the damage they cause. They eat up different plant parts, including the stems, leaves, and flower buds of their favourite plants. Usually, they attack the entire cabbage family. If you grow any members of this family in your garden, you must know how best to protect them. This […] Cabbage is a staple in many people’s diets. It can be eaten raw, cooked, or fermented and has a low glycemic index which means it won’t spike your blood sugar levels like other foods might. The nutritional benefits of cabbage are huge and include vitamins A, B6, C, K as well as potassium and fibre. […]