How Do I Get Rid Of Moles In My Garden Moles are well known for being threats to environmental activities like farming, lawn maintenance, and gardening. So how do you get rid of moles in a garden? This is important to know that they often do not consume plant roots; they only directly cause damage because microorganisms and other small crustaceans are eaten in the soil.

However, while moles may be considered pests, they do have several significant contributions to the soil.

These animals mainly live underground and often throw up molehills on the earth. They dig out a series of mole tunnels and chambers and get rid of the soil that is excavated. Very rarely are moles seen as they often just remain below the surface of the soil.

How Can a Mole Be Found In Your Garden?

The easiest way to know if you have moles in your garden is when you start to notice little heaps of soil sample thrown up on the surface of grass and flower beds (mole hills). Heaps of excavated land thrown up on the surface of lawns and flower beds (mole hills) are the first symptom of mole presence. Getting rid of them, however, is not that easy.

Moles burrowing through the soil will disrupt the root of seedlings and other tiny plants in flower beds and vegetable plots.

With pointy muzzles, tiny eyes, and bodies shaped like Idaho potatoes, moles are garden pests that can best be described as ‘shocking little animals’. They swim underground in motion, using their large front flippers to separate the soil as they go. They also rely on the existence of loamy, moist soil and are most active in spring or fall in the morning or evening.

They also come out after hot rain showers.

How To Get Rid Of Moles In A Garden

Below is a list of some most effective pest control and ways to get moles out of your garden:

Trapping: Setting mole traps can be very effective. In some cases, people with more vengeance on their minds will take more time and properly seek out the mole tunnels and set the traps properly. To kill moles, tools for trapping moles are available at garden centres and hardware stores. When deciding on whether this is a good idea, it really should be taken into consideration that empty tunnel networks can easily be taken out by just one mole in the vicinity, so you may not be free of moles in your garden after catching one. Using the tunnel or half-barrel trap may be better than other designs that are available.

These type of traps are considered a humane type of control if used properly, because death when induced, should be instantaneous.

Planting: For plant species such as Cacao beans, Marigold, or Fritillaria, there is no evidence supporting claims that they properly deter moles. It is worth the try, but also be sure to remove most of the flower heads before seeding occurs or the plant can become invasive.

Electronic devices: Very often, using a solar-powered mole deterrent works a treat. Research has shown that their buzzing tapping noise drives moles away, but this may be to another part of the garden. 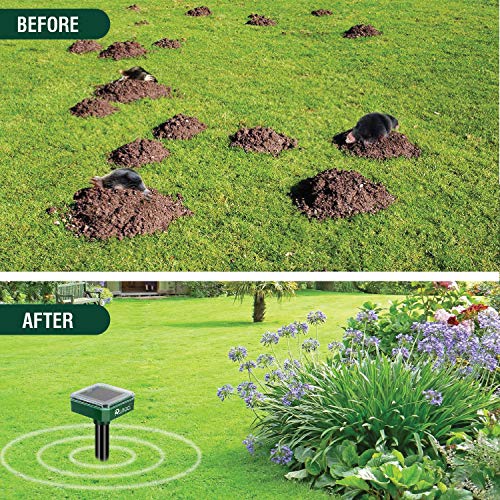 Poison baits: Prior to the introduction of this poisoned bait, serious research on the types of soil that moles dig in was done. The Tomcat Mole Killer (Talpirid), seems to have been successful in most experiments carried out on mole hills. Talpirid looks very much like an earthworm, one of the moles’ favourite dishes.

Netting: In some cases, netting can be used to prevent moles from coming to the ground surface to grow molehills. The key thing is to lay this on the layer of top soil prior to laying your lawn.

Using mole repellents: Another humane type of mole-repellent is the use of smoke. This is often marketed as Pest-Stop Biofume Mole flames, and it generates castor oil fumes. This is then said to fill up the tunnels and prevent worms and other mole food from coming into the tunnels. This usually gets the hungry mole to move elsewhere. Then again it could just build new link tunnels and move around.

Ways of preventing mole from getting into a garden : How to Get Rid Of Caterpillars On Rose Bushes

How Do You Get Rid Of Magpies If you own a vegetable garden, then controlling the garden pests and protecting your crops from damage is something you’ll have to deal with. Usually, gardeners are quick to opt for using harsh chemicals like insecticides. However, there are other ways to control pests and still maintain a healthy garden void of chemicals. This article […] How Do You Control Slugs Naturally?

If you are a gardener and have experienced the frustration of slugs eating your plants, then you may be wondering how to control slugs naturally. Slugs have the power to wreck your garden! These pesky molluscs love sneaking up on unsuspecting plants and feasting away, before slithering back into their habitats. If your plants are […] Foxes have been a nightmare for many garden owners, and sometimes they find it difficult to keep them away. Foxes are known for digging, chewing, and dropping waste that can cause serious damage to the flowers and other things in the garden. If you have been experiencing this and all your effort to deter foxes […]